As we say goodbye to yet another intern, we asked our spring intern Chelsea Flowers to sum up her experiences at Foxfire. 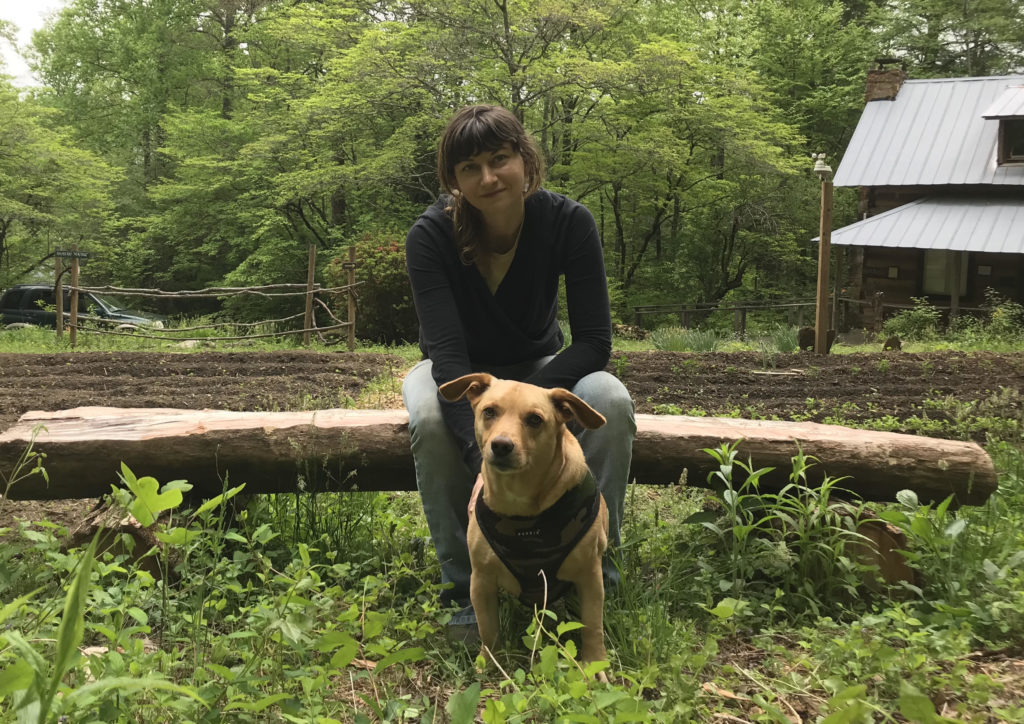 Chelsea and her dog Graeme, who also ‘interned’ with Foxfire this semester.

I feel like I just got here! The reality is, it’s been four months and change since I headed west from the Piedmont of North Carolina in mid-January to intern at Foxfire. The time has flown, thanks to the dynamic nature of the internship and the liveliness of the Foxfire Museum.

A large part of my work here has been conducting archival research and curating content for the forthcoming Foxfire app, funded by the Appalachian Regional Commission. The app will host photographs, audio clips, and quotes from Foxfire interviews, and provide some historical context about Southern Appalachian life. I’ve focused on skills essential to life in early mountain homesteads: herbal medicine, agricultural practices, and foodways. These topics are also meaningful to me on a personal level. I have an MA in Public History and certificate in documentary studies, but over the past ten years I’ve also worked on three farms, apprenticed in an herb garden, worked alongside a wild food forager, taken classes in ecology, and learned whatever homesteading skills I can squeeze in. North Carolina, where I am from and still live, is filled with pockets of land projects and heritage centers, so coming to Foxfire has felt very much like being home.

Through its magazines, books, and classes, Foxfire has paid tribute to the communities of Southern Appalachia. It has honored the daily lives of all people and profiled so many seasoned makers who spent a lifetime working in their crafts. Foxfire isn’t about keeping that past in the past; it’s here to showcase that we can still experience resourcefulness and resiliency by carving out ways to incorporate do-it-ourselves tasks into our busy lives, by adopting what we can even within the constraints of modern times. In many years of museum visits and classroom discussion, I’ve seen the past become disconnected from the present. I’ve seen guides and teachers try to make a lesson more interesting by reminding the audience, particularly kids, how lucky we are to be divorced from the hard lives of “back then.” It makes sense; the juxtaposition is interesting and it’s true that hard work was necessary, not optional. All of my foreparents were farmers-turned-mill-workers from the sandhills of North Carolina, and I’ve heard them talk about that make or break life. But while they was were grateful for the help that new technology and resources provided, they recognized that in that life too was near total self-sufficiency for decades, deep community, practical skills, and innovation. As Addie Norton summed: “When I was comin’ up it was hard times, children, but I was just as happy!” 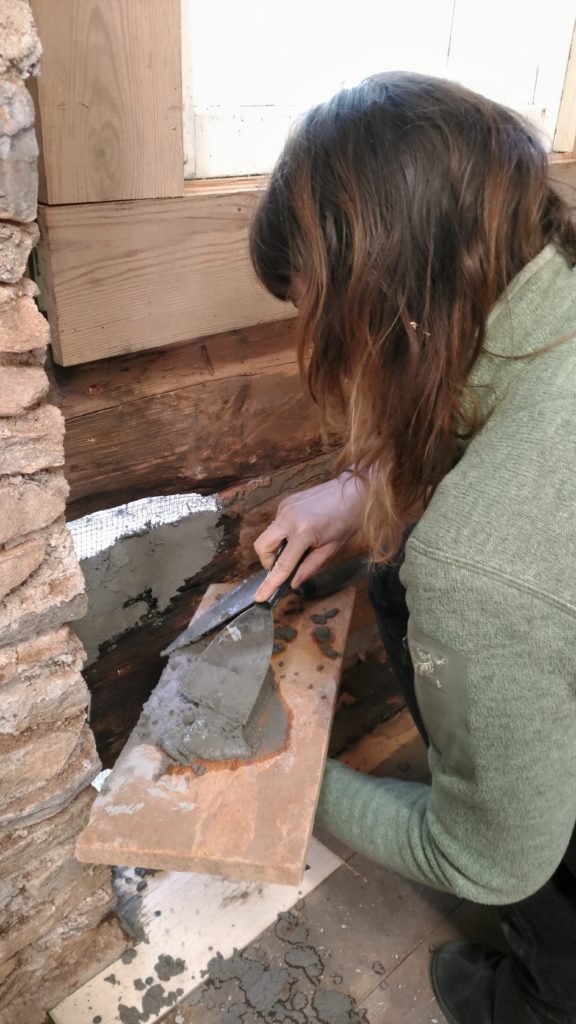 Chelsea also helped rehab the Phillips Cabin, which included chinking between the logs.

In the last few years, there has been another wave of back-to-the-land mindedness across the map. Living off the land has, of course, always been a way of life for many, but we’re seeing a revitalization that goes far beyond farm-to-fork organic eating. There’s been an especially strong surge in popularity of edible wild plant classes, herbal medicine-making workshops, natural dye demonstrations, primitive skills, and other DIY education. While the Foxfire museum has been a home to cultural heritage through public programs since it was established in 1972, it too is brimming with intensified energy. The herbalism cabin has just opened and includes a native plant garden and class program. New exhibits are being planned across the museum, summer camps are soon to be underway, the Foxfire podcast, “It Still Glows”, began this spring, and courses in heritage skills are continually expanding. It’s been an inspiring time to be here as intern, witnessing Foxfire continue its mission with such spirit.

During the many hours I spent in the archive listening to oral interviews and reading transcripts, I’ve encountered a host of other issues: people’s thoughts on tourism and land development, experiences in the Civilian Conservation Corps, how rural families were affected by the Depression, midwifery, and weaving. These are all topics I’ve explored in years of undergraduate and graduate history classes, but digging through the archives and listening to first-hand accounts is invaluable. Through people’s own words, we better grasp the commonalities and differences between communities, which helps make the history we know digestible and relatable.

I was also given the opportunity to tend Foxfire’s heritage garden. Until the mid-20th century, nearly every rural family grew their own food and raised animals. In the heritage garden, we’ve tried try to mimic a modest, hand-tilled kitchen garden. For spring, that includes Irish potatoes, leafy greens, beets, carrots, and cabbage for the ever important sauerkraut. In the summer there will be the important trio of sister crops: corn, squash, and beans, plus the southern staples: okra, tomatoes, and peppers. It’s been important to get my hands in the dirt again, but I’ve also developed an appreciation for the abundant and uncultivated flora of these mountains.

One of my favorite things about working here has been the opportunity to lead guided tours. It’s great practice to “talk history” with the many different age groups that visit and discuss the ways that this history connects to their own lives. Public history is as much about connecting the public to history through collaboration as it is about telling a more inclusive history about the public. So, when taking groups on tours, public historians balance several objectives. We want to reach our educational goals. We want to communicate history in a way that is engaging and thought-provoking while recognizing the interests of our diverse visitors. A public historian strives to teach as deeply as they can while being flexible and encouraging participation. These tours, which cover everything from social history to farm tools, are a great place to teach and learn from visitors.

As Foxfire began redesigning its museum exhibits as part of a grant from the National Endowment for the Humanities, the Moore House, home to folk pottery pieces and historic glass bottles, needed some significant prep work. Before this exhibit could be updated, each object needed to be taken out and catalogued according to standard museum practices. I learned more about dating vintage and antique bottles than I ever dreamed. What at first felt daunting (I had absolutely no knowledge of glass bottle archaeology) became a fun challenge. Descriptive cataloguing is an excellent skill, as it encourages you to consider how you would explain all the physical properties of an item. It’s an excellent refresher in terminology and you are always bound to learn a few new cool vocabulary words. Now as I return to North Carolina, I have Foxfire to blame for my newfound interest in glass bottle dating. 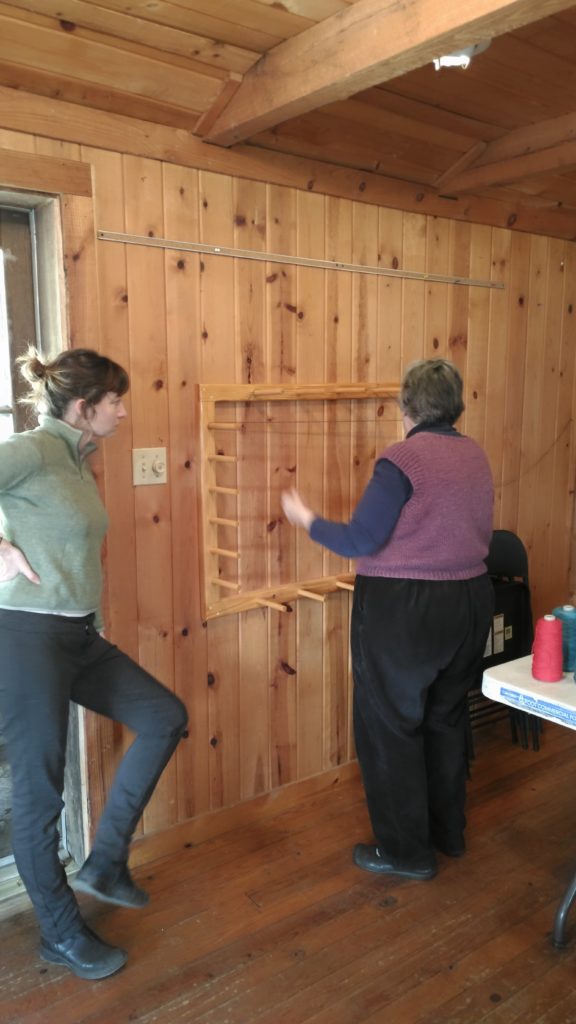 Finally, as I’m pretty opportunistic when I’m in a new place, I tried to take full advantage of being around so many instructors. Sharon Grist, the weaver, has graciously helped me begin weaving; Kermit Rood, the woodworker and carver, went above and beyond to share his knowledge. Carole Morse has been generous with her time and demonstrations and Patricia Howell, the herbalist, has been wholly welcoming and supportive. They are each extremely skilled and energetic in their work and have been enthusiastic, kind, and patient with me. As they will be to any learner who seeks them.