“I Just Love People”: Selma Mosley and the Baptist Church

Rabun County is home to many different faiths and churches. In 1982, Foxfire released Foxfire 7, the first Foxfire book dedicated to the study of religion in the region. Editor—and former student—Paul Gillespie noted that “there was a strong feeling among our students and staff that due to the importance of religion to the people of our region and the fact that it provides the basis for many of their beliefs, attitudes, and activities, that the material should be compiled and offered as one of the Foxfire book series.” While this book does not represent every religion and every faith present in Southern Appalachia, it does take a deep look at some of the most influential denominations.

In the following interview excerpt, Selma Mosley shares her experience growing up Baptist as well as her time with Ivy Hill Baptist Church, right here in Clayton, Georgia.

“I joined the church when I was eleven years old. I attended church [and] different church activities during all my girlhood and as a teenager. My father was a minister. When you were young, you were just taught to go to church and then you played in different activities. I was in the choir and I was teacher of the intermediate class in Sunday school, and then I was in the prayer service—that I loved. That’s really where I got converted. My father always led the prayer devotional. We had BYPU (Baptist Young People’s Union); I was president of that. Then we had a Junior Young Women Circle once a week. The older women had a Missionary Circle. So, it kept us busy. [I was] very active [in the church] all during my young life up to this present year of 1977. I came here in Rabun County, Georgia, in 1947. I was here for just a few months until I connected up with the Ivy Hill Baptist Church. I’ve been a member ever since and I’ve been active in the church here ever since I’ve been here, and I’ve been here thirty years. 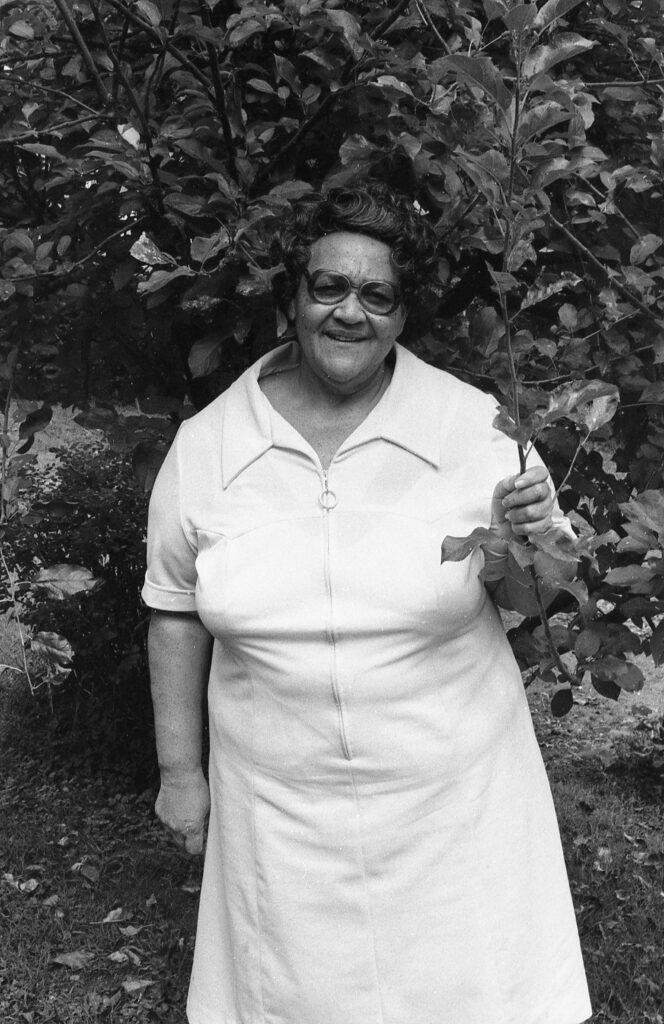 When I was a girl, the older women had what they called a Missionary Circle and they would sometimes have an evening prayer service. I was always with the older group. I followed them to these meetings. I liked that. I would sing as a girl. God gave me the gift of singing and I have sung in church and prayer service until I have seen those old wo men shout and almost look like they were going to tear the building down. You don’t see too much of that now. Back then, people were really with it. You know what I mean? They were very active in Christ.

Back when I was a girl, they used to have the revival services. They had one week of prayer. This was to get the Christians heated up and ready. Then, when the preacher came in, honey, he had to preach. Oh yeah! That second week, those Christians were really on fire. That preacher—all he had to do was hit the pulpit and I mean he’d preach his heart out. He had to, because it was so warm you could feel the love and the Holy Spirit. There used to be some of the best revival services that I believe I’ve ever seen.

Older people used to help one another with their children. If they saw your child do something, why, if they didn’t whip you, they’d make you think they were going to whip you and they sure were going to tell your parents. If I didn’t know you, and I saw you doing wrong, I’d like to say something. To let you know that you’re just doing wrong. Sometimes I think if we got involved a little more, it would be a better world to live in.

When the Lord saved us, He saved us to help save somebody else. He doesn’t want us to be selfish. He wants us to spread His love and help people. This is my main goal. I love to reach out for somebody and do something or say something maybe to help somebody.

We just stayed members in the Baptist church. Papa knew it was right because he was a minister. He had preached and he just got stronger in the Lord. They could speak in tongues, and my mother could too. I’ll tell you, they shouted the floor out in our living room. They had to put a new floor in it. they worshipped in our living room for two years. It was Black, but now the whites and the Blacks congregate together and they have a wonderful time. I’ve been away from home a long time, but I go back every once in a while. They have a beautiful church. Everybody comes together now. All of God’s people can get together.”

To learn more about Selma and others religious experiences in and around Rabun County, pick up a copy of Foxfire 7 from your local library or order one at www.foxfire.org