While we work on bringing you more great content in season 3, we are revisiting one of our very favorite episodes from season 1, featuring an interview with Aunt Arie Carpenter. 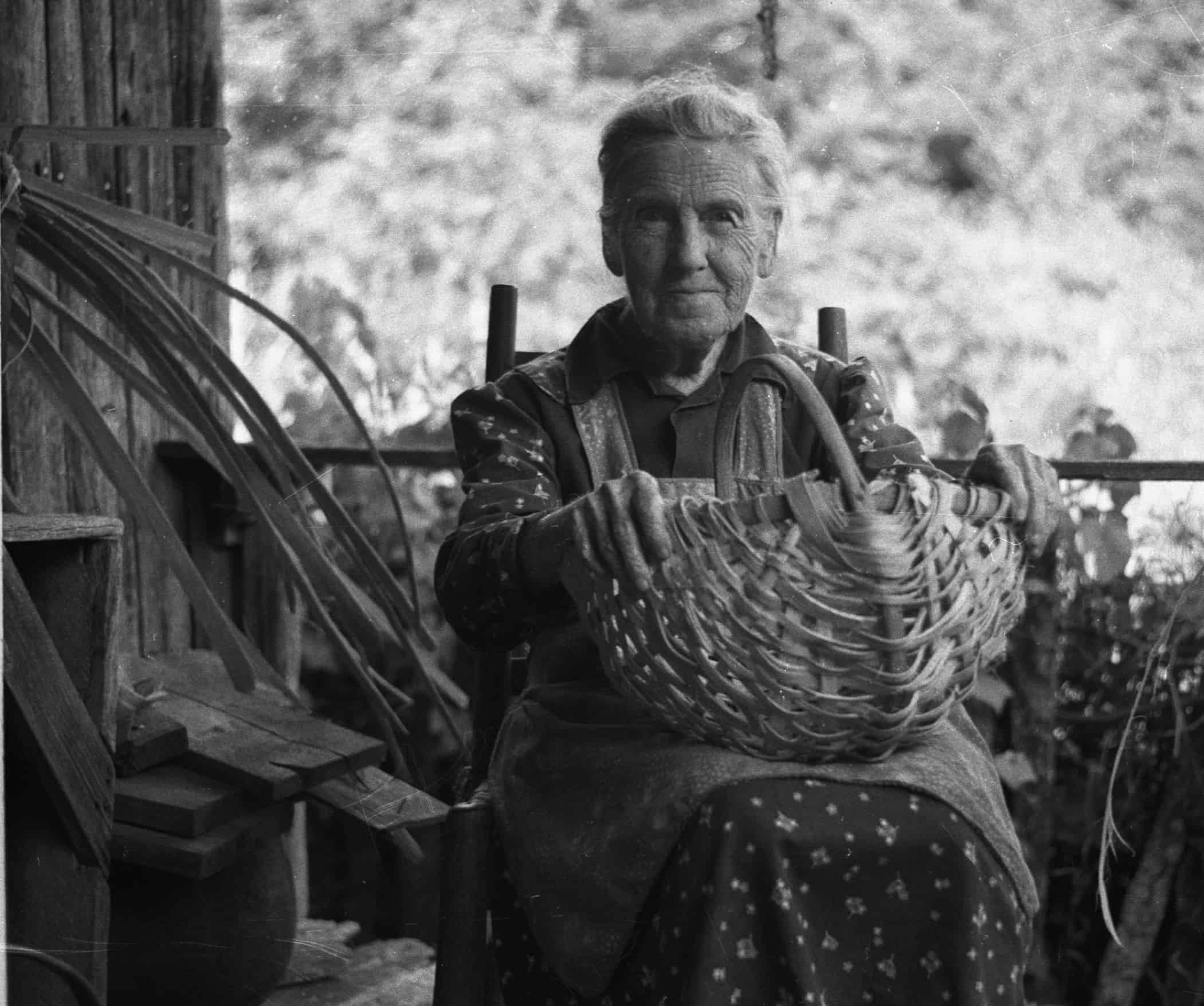 Aunt Arie Carpenter with a white oak basket she made for Foxfire students.

Born Arie Cabe in December of 1885, Arie never traveled further than 40 miles from her home in North Carolina. She lived to be 92, despite living alone for the last 12 years of her life. She grew up with a hard working father and sickly mother, whom she spent most of her time caring for, and four brothers. She didn’t marry until she was 38 years old, after her mother had passed. Her husband Ulysses had a child from a previous marriage, but Arie did not have any children of her own. She cared for many sick people in her community and gave nearly everything she owned to those in need. She first came to the attention of Foxfire through a student, Andrea Burrell, who was friends with a relative of Aunt Arie’s. This connection developed into a long, close-knit relationship between Arie and the Foxfire kids. Arie Carpenter became an iconic figure of the Foxfire program. She welcomed the students into her home, and shared decades of history, foodways, folklore, and craft with them. In 1983, a book just on Aunt Arie was published as a companion to the Foxfire anthology and is available here.

Arie: “I don’t want to cut it if I can help it, ‘cause the black stuff will run all over everything. (laughs)” Foxfire: “Let me see if I can get it.” Arie: “Give it a good pull and see if you can… (laughs) Oh my goodness. See if you can pull it there…Oh goodness, my. Now see if you can take your fingers, and pull that eyeball up and cut it off.” Foxfire: “Okay.” Arie: “Now, I can but if I had strength.” Foxfire: “Now tell me again what you’re going to make with all this, what you’re going to do with it.” Arie: “Souse” Foxfire: “Souse?” Arie: “You best eat souse meat. Boy, that’s the best stuff. I love it better than I do sausage.” Foxfire: “And how do you make that?” Arie: “Take this now, and I’ll soak it, I’ll soak it ‘til I get every bit of blood out of it. I never cook no…” Foxfire: “Soak all the blood out?” Arie: “Yes, soak it ‘til it’s just a-white in the morning. That’s when it’s gettin’ ready to season. Then I’ll cook it, and then I’ll take it and grind it on that sausage grinder they had it at —- house last night. And, uh, take the juice that this is cooked in–part of it–and put some sage, I ain’t got no sage though. put black pepper in it, and red pepper, and stir it all up, it’s just so good and fine as it can be. And then put it in them jars and seal it, in little cannin’ jars–I always put it in pint jars. And then along any time in the winter and eat it. Boy I love it better than anythin’ in the world.” Foxfire: “And how do you cook it? Do you cook it when you take it out or do you cook it before you put it in the jars?” Arie: “I cook it before I put it in the jars.” Foxfire: “And then when you take it out, you heat it up?” Arie: “Well, yes if you don’t want to eat it cold. Lots of people eat it cold. I fix mine in this pan and then pack it in jars and then process it just a little while.

Arie: “And you know how much candy I bought in my life before I was married? And I was married, I was 38 years old before I married. And I bought one nickel’s worth of candy in my life. I just didn’t have nothin’ to buy it with.”

Foxfire: “Well how did you, did you make your own clothes?” Arie: “Yeah, ‘bout everything I’ve had in my life has been homemade. I ordered two undercoats the other day, got Marie down here to order them. Couldn’t get ‘em down here, I wouldn’t have done it. And I said, I’m 84 years old and that’s the second undercoat I ever have bought in my life. Now that’s the truth. Boy they good and warm though. They’re part wool. But boy, I paid enough for ‘em. Paid seven dollars for two and that was terrible. When you go to buy stuff ready-made, you have to have a pocketful of money if you get it anywhere nowadays. I’ve done a lot of sewin’, Lord I sure have. I’ve done sewin’, and cardin’, and spinnin’, and knittin’. I can knit with four needles. Yeah, I knit a many a pair of wool socks, it’s true. And crochet, I’ve crocheted lots too. I never sit here and do nothin’.”

Arie: “Well, I guess I’ve got just about what I’ll have when I tuck away from here. Looks like the porch out there is going to have to be fixed. And they want me to sell the place so bad. You know they ask for this place all the time.” Foxfire: “Who’s after it though?” Arie: “I can get lots of money for this place and I know it. I’ve already been offered lots for it and I wouldn’t take it. All for $500 an acre, for forty acres at the backside of this mountain. See now, this land – you know where Punchbowl’s at? – anyhow all across this mountain, goes plumb down on the other side, and the government comes up there. And they want that. And I said, I don’t want to sell it. And he just looked up at me, it was so funny. I said, I guess that was one time I missed it. He said he’d give $20,000 for forty acres. Well that or–there’s 68 acres, all of it. Take that other–I ain’t ever subtracted that from that–and then he’d give $1,000 an acre for the rest of it. I said, what would I do with that money? They looked at me funny. I don’t care nothin’ for money. But you have to have it. You know, you have to have money to live.”

Foxfire: “Why do you want to stay? I think I know why you want to, but I want you to say it in your own words.” Arie: “Well it’s just home, that’s all. Yes, it’s just home. And I will stay here so long–spent my happiest days here. And I tell you the truth, I’m not bothered with one single thing in this world here.”

Arie: “I been awful little all my life. My hands never have been nothin’, but boy they’ve done lots of hard work. I wish I could–well there ain’t no use in wishin’ on such as that. Call back, 25 years ago when I could work. That’s silly. I think, I honestly lived and done the best I could. And then wish you could go over your life again? I think that’s silly in a way.” Foxfire: “Well, I don’t know. I guess just whatever…”

Arie: “Where there’s a will, there’s a way. And since I’ve been like I am, just like this was, there’s always somethin’ comes in just in time. Now that don’t look like it do but it does.

Arie: “Now they used to say that Grandpa Carpenter made whiskey. That was my husband’s daddy. No, it was his grandpa. And, they kept tryin’ to get him to stop and he just kept making whiskey. I don’t know where at. And one night he was off makin’ a run and the chains came just rattlin’ around the house. That was the haint, now, that was what they called a haint. And he quit that night and poured out every what he had and quit that night and he never made another drop of liquor. Scared him to death, he never did make another drop.”