For the month of October, It Still Lives  is bringing you spooky tales of the supernatural from right here in Rabun County, Georgia. Join us each week from now until October 29th for tales about witches, haints, and jack-o-lanterns! This week features an excerpt from storyteller Ethel Corn of Dillard, Georgia. 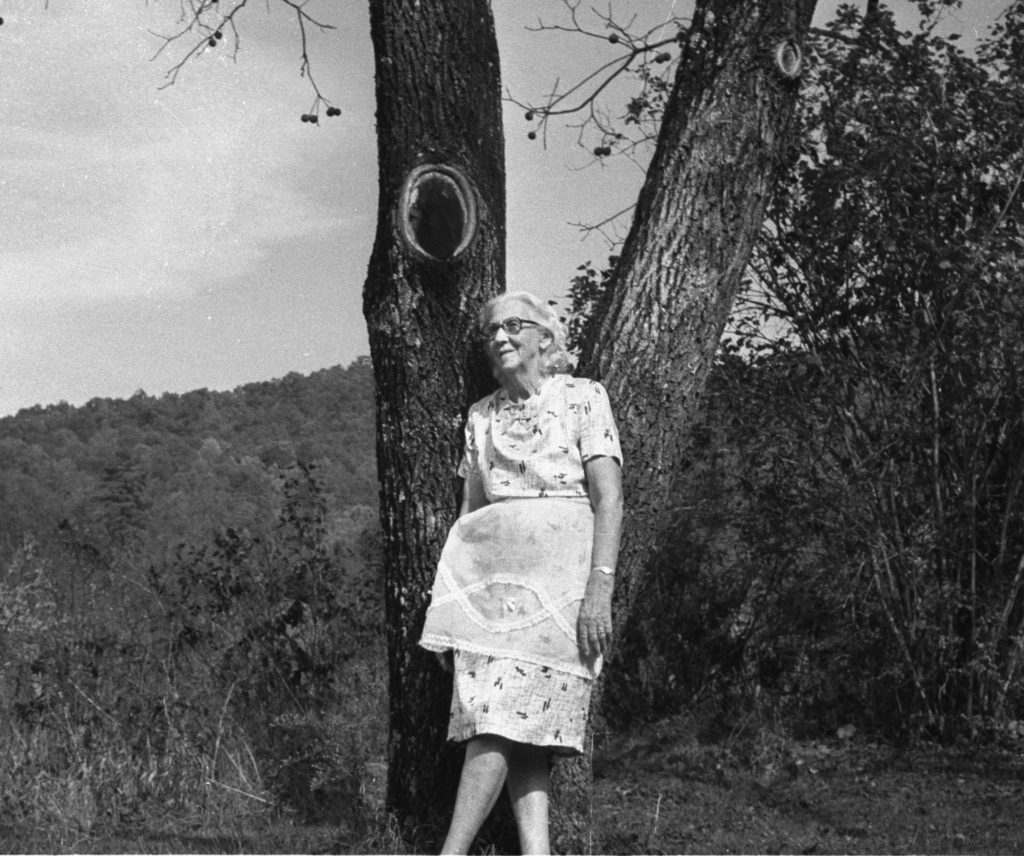 Ethel Corn outside her home.

FF: Tell us some of them strange things, Granny, that you seen and all.

EC: I was livin’ in Charlotte. We lived off in the backwoods and there one night at about eleven o’clock, why, they woke me up and said the house is on fire. I got up and looked out and back in the east, it looked like sun and growin’ water, but it looked like streams of blood a’comin’ down from that. And it passed on, it was in the east, and it went on straight on up towards the north and it lit up ‘til you could’ve picked up a pin in the house. And I guess it was ten or fifteen minutes a’goin’ on. But it looked like it was blood a’comin’ plumb down to the ground. And there was nobody knowed—there was a lot of people that seed it—but nobody knowed what it was. And long after that, they said—there was reports in the paper—of seein’ in back in about Asheville and through the mountain part of the country.

FF: It lit up the whole house?

EC: It lit up the whole house. It was just as light that you could’ve picked up a pin in the house. And it liked to scare the young’uns all to death. And I wasn’t scared because I believed it was a representin’ fulfillin’ of places in the Bible. And I got the Bible and got to readin’ to ‘em, in Revelations where it speaks of all of these things and wonders that we’ll see. And they was reconciled from it at that, that it was a somethin’ God had seen that wasn’t intended for us to know just what it was all about.

FF: Well what was that? What did that thing look like that you talked about was it poppy’d seen, or who was it that seen it, you know, that was carryin’ the torch?

EC: That was ‘long before Uncle Jake Collins died. And he’d seen the light and it looked like a torch come from the house up there. It was just two or three days before he died, or night rather. And there was a trail come from the house down through our swamp and he watched this. And it come on down right at the end of the swamp and went up to these beegums and come down nearly to the kitchen door. And it went out. And it was just two or three days after that, that he fell dead. And we always thought it was a token of his death because tokens will be of things to happen like that.

FF: And it just looked like somebody carryin’ a torch?

EC: Yeah, looked just like somebody was carryin’ a pine torch lit in their hands. And it come down right at the kitchen door. And it just vanished.

FF: Well, what about that and uh, and them things, them lights that go—the jack-o-lanterns. Now what do they look like?

EC: Well it’s kind of a round lookin’ thing. And it’ll come and they’ll play up there and go down low to the ground and high up. And they’ll see it always over here on what’s called the Cheney Hill. And some said that it was from minerals, it was a grain of mineral goes through there and they’ll rise, and go up and they’re pretty good size lights. And they’ll play all over the bottoms down below there. But there’ll be a certain time that they’ll come and sometimes they’ll go way up and back down.

FF: Have you ever seen any other strange things like that? That you didn’t know what they was and all?

EC: Yes, I been out a’plowin’ and I’ve wanted to get the bottom plowed out and I plowed ‘til it was dusky dark. When I got in and went to put up the horse and got the corn and went to feed it and right at the back of the stable there was just a big light—rose down right there in the back of the stables in the swamp and it kept goin’ higher and higher. And I was young’un. I wasn’t plumb grown and I was awful cowardly. And I throwed the corn through a crack in the stable, I didn’t put in the trough, and run. I never knowed what it was.

FF: It just started on the ground and went up?

EC: Well it just rose from the ground and it kept goin’ higher and higher. And I didn’t take time to watch to see how it went. I run.

FF: Well are there any other things like that? That you seen or heard about people seein’?

EC: Yes. We was a’comin’, me and my uncle from Dillard. One day…

EC: That was Uncle Jake Collins. And we was comin’ down the railroad then. Only way back then we had a’going, just ride in the wagon, horseback, or walk. There was no cars in here. And we looked on the hill over there and it was somethin’ white. And it moved just as smooth as it was somebody but it was solid white and it vanished into them pines. We never knowed what it was a’tall.

FF: Have you heard of anybody else a’seein’ things like that?

FF: What was some of them?

EC: I heard my daddy tell when he was a young man, they lived back in the mountains, just this trail way, and it was after dark and he said there was a big white somethin’ come over and said kind of scared him but he ventured on to see. And said it was white. As they went down, in the trail, just out ahead of them. And it stopped, but he knowed he had to go on by that, and he went on. And he never could see or he didn’t know what it was.

FF: What did he think it was?

EC: He didn’t have no idea. Now, we come down from the church, Newmann Chapel Church—the old Newmann Chapel Church—and been back up in there…, we were workin’ in the fields. And it went like benches and everything else were turnin’ over in the church. And I thought there was somebody in there, that broke in. And I went and the doors was still locked and I looked in the windows and we never could see nothin’. And I went on home and that evenin’, right late, they come up and told me that Gertrude Norton was dead. They was goin’ up to ring the bell. Back then, when anybody’s died, they’d go and ring the bell. But there wasn’t nothin’ in the church where I could see in at the windows good and there was no benches or nothin’ to stir.

FF: Well who was that—tell about that boy that time that saw, thought there was that somethin’ after him like that and it was somethin’ behind his neck a’floppin’. Who was that?

EC: That was Andy Burrell. It was his tie floppin’ and he had to go home. But he come with—they was runnin’ a meetin’. Some women preachers come in to Dillard [Georgia]. And we’d come, and he’d come on home from there. And he went on home and he went up, he had to go up the branches and it was in the winter time, right cold. And wind was a’blowin’ right hard, and it got to blowin’ and floppin’ his tie back over his shoulder. And he never thought it would be his tie, and he run about a quarter of a mile up the mountain. He just gave completely out and when he did, he found out it was his tie that was doin’ the floppin’ and makin’ the racket that scared him and took his heart race up.

FF: Well tell us that ‘un about, which one was it, about the no-headed cat? That seen the cats? Who was that?

EC: That was just an old tale told, I don’t know who it was. But it was this hitchhiker and he wanted a place to stay the night. And they told him that he could stay in that house but it was haunted. And he said he didn’t believe ‘em, that there wasn’t no such thing, that he’d stay in there. And he went in there and heard cats around and got down, and directly the ol’ no-headed cat come a’walkin’ around. And he jumped out of the bed and he started runnin’ to get away from it. And he said he run down the road ‘til he give out, he thought he was far enough away to there wouldn’t be nothin’ around, and said he just give out and he sat down to rest. And said, directly said the, somethin’ said, oh it says “We’ve had a hell of a race, ain’t we?” And said he looked around and there set the ol’ no-headed cat by him. And he got up and took off.