We have a special bonus episode for you this month! In July, TJ Smith, our executive director, was invited to visit China as part of an exchange program hosted by the American Folklore Society. For this episode, hosts TJ and Kami sit down to discuss his trip. As a companion to the interview, TJ has written a blog post about his journey, complete with some great photos. Enjoy!

Back in April, I was contacted by Jessica Anderson Turner, executive director of the American Folklore Society (AFS), and asked if I would be interested in taking part of an ongoing cultural exchange program with AFS’s counterpart in China, the China Folklore Society (CFS). You can read more about AFS and CFS here, but the relationship was started in 2007 to connect folklorists and institutions. For over a decade now, American and Chinese folklorists have been meeting and sharing ideas about the unique and diverse cultures of their respective nations, as well as discussing how to best safeguard and preserve folk traditions.

Folklorists from America and China alternate between institutes and workshops hosted in both countries. To this date, AFS has sent over 60 American folklorists to China to participate in the program, including professional folklorists like our group who serve as faculty to a small number of Chinese graduate students and early-career folklorists.

This year’s folklore summer institute was held at Sun Yet-sen University in Guangzhou, China. Located in southeast China, Guangzhou is the third largest city  and a bustling economic center. Sun Yet-sen is a top-tier, international university, and provided a stunning backdrop to the week of the institute. I don’t want to go on too long about this, but I did want to supply some more photos from the trip to provide some visual aids to accompany the podcast. 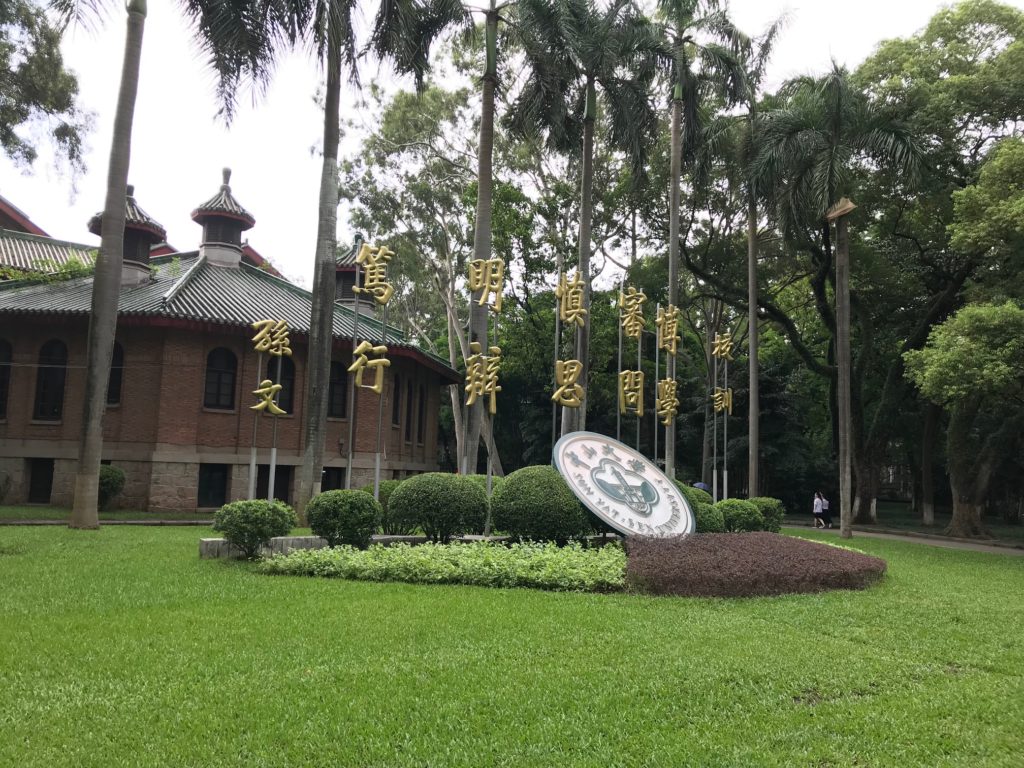 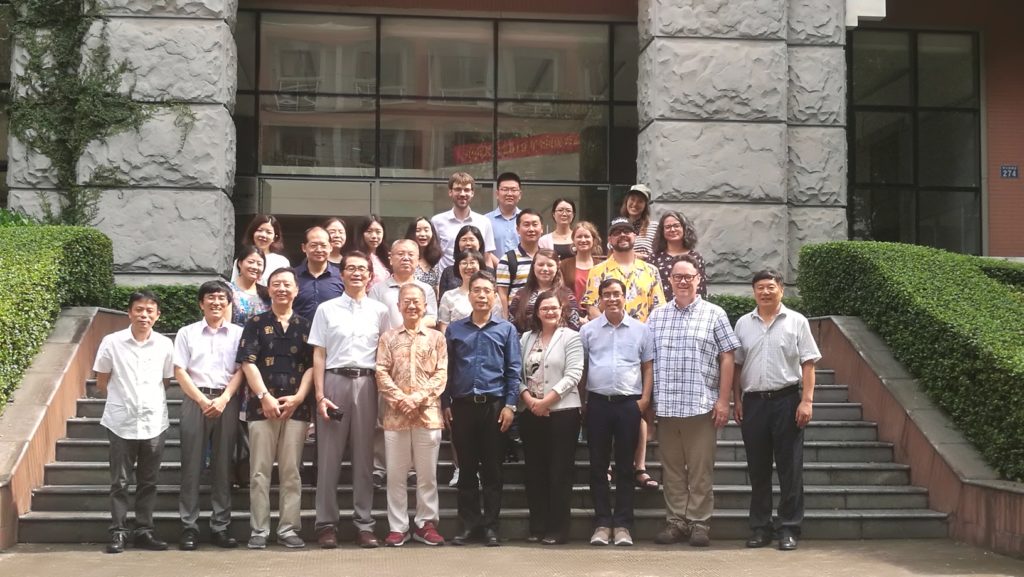 As part of the institute, we participated in an international folklore conference hosted by Sun Yet-sen that included professioanls from the U.S., China, Japan, and Germany. 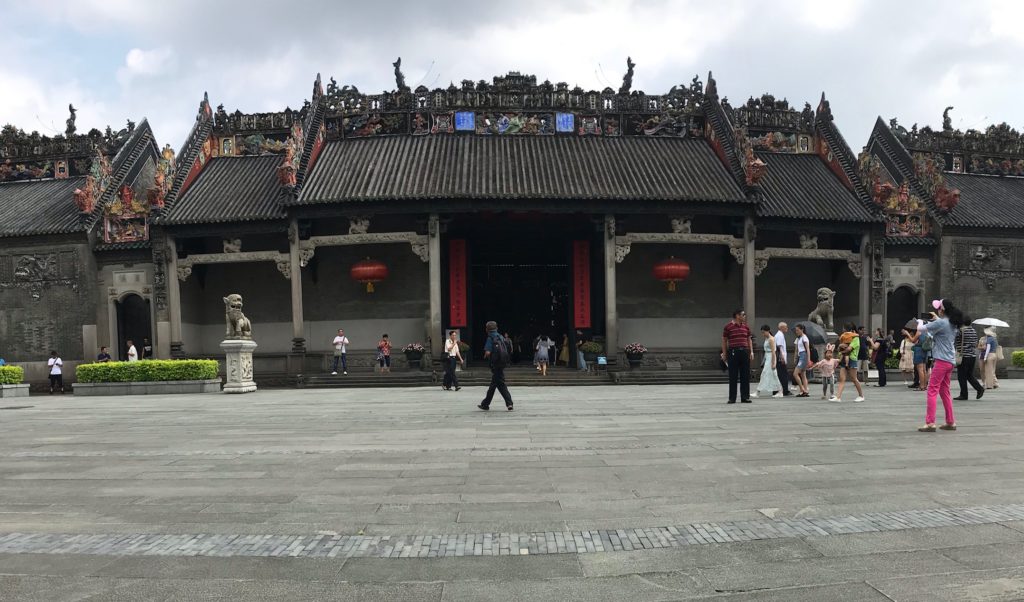 We also took a few field trips, including one to Guangzhou Folklife Museum at the Chin Family Ancestral Hall. 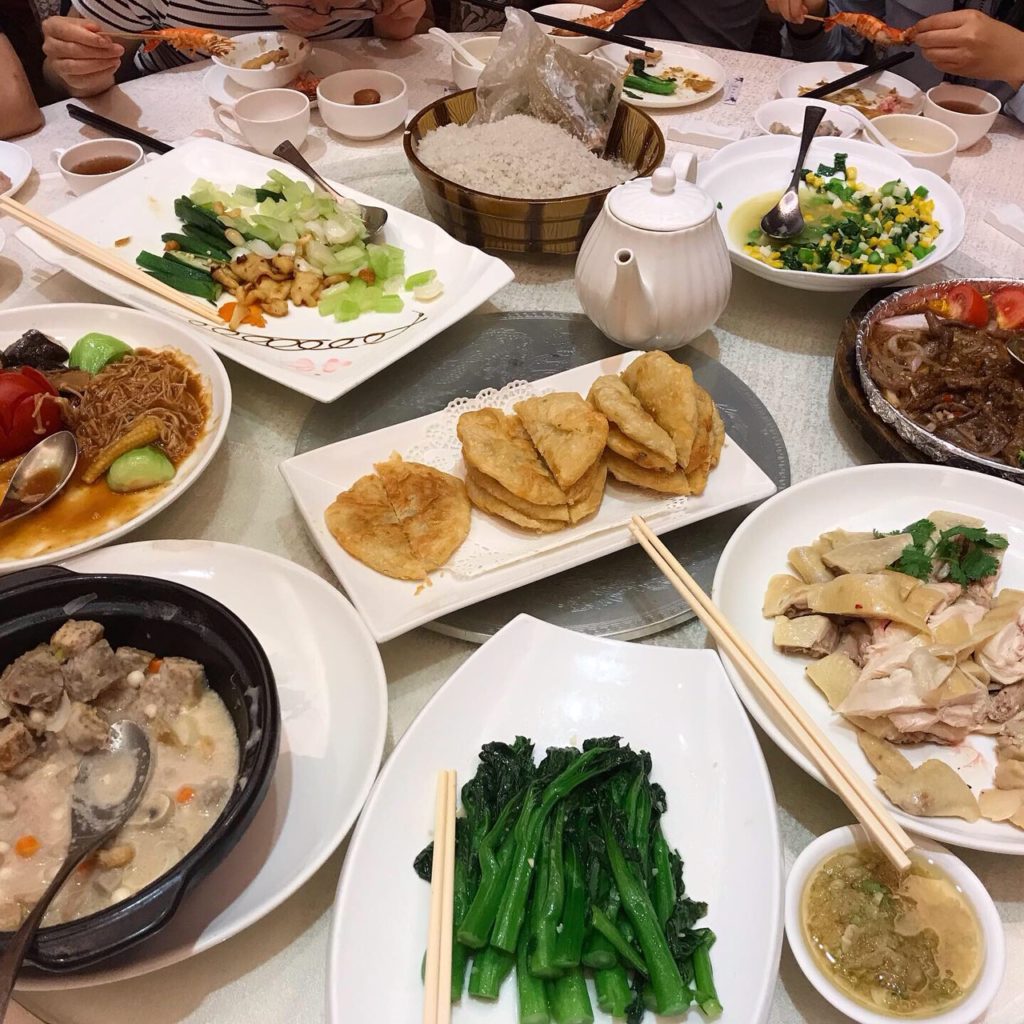 Most of our meals were banquet style, with a lazy Susan constantly filled with amazing dishes. 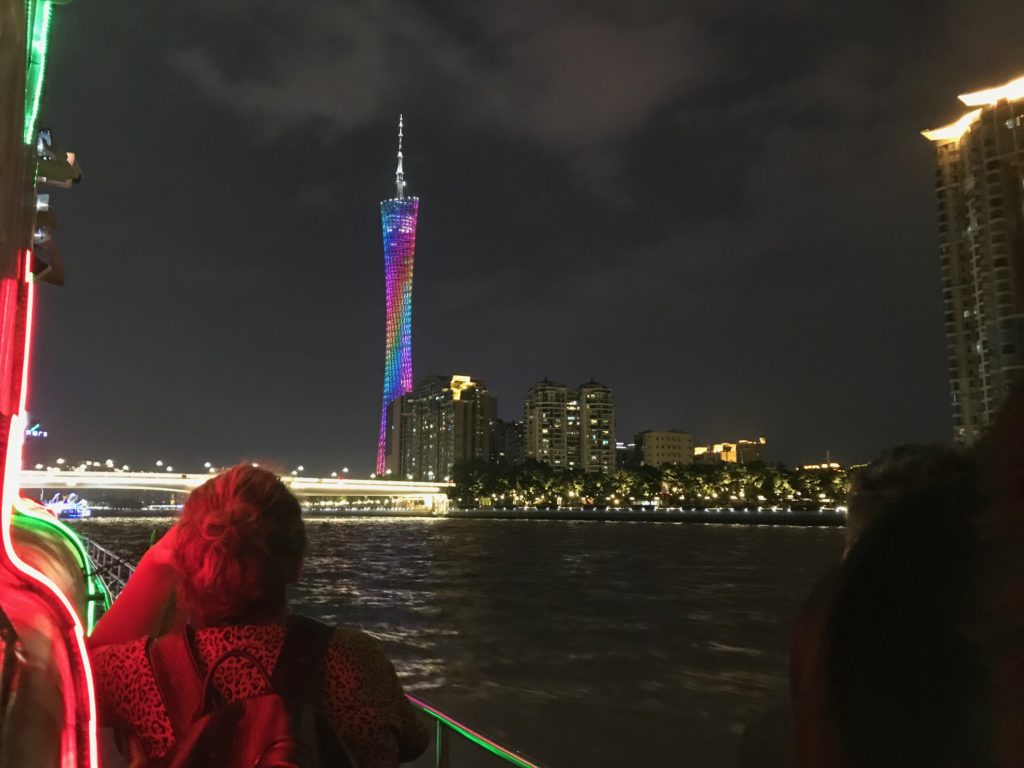 The Canton Tower at night, from the Pearl River, is really quite a sight! 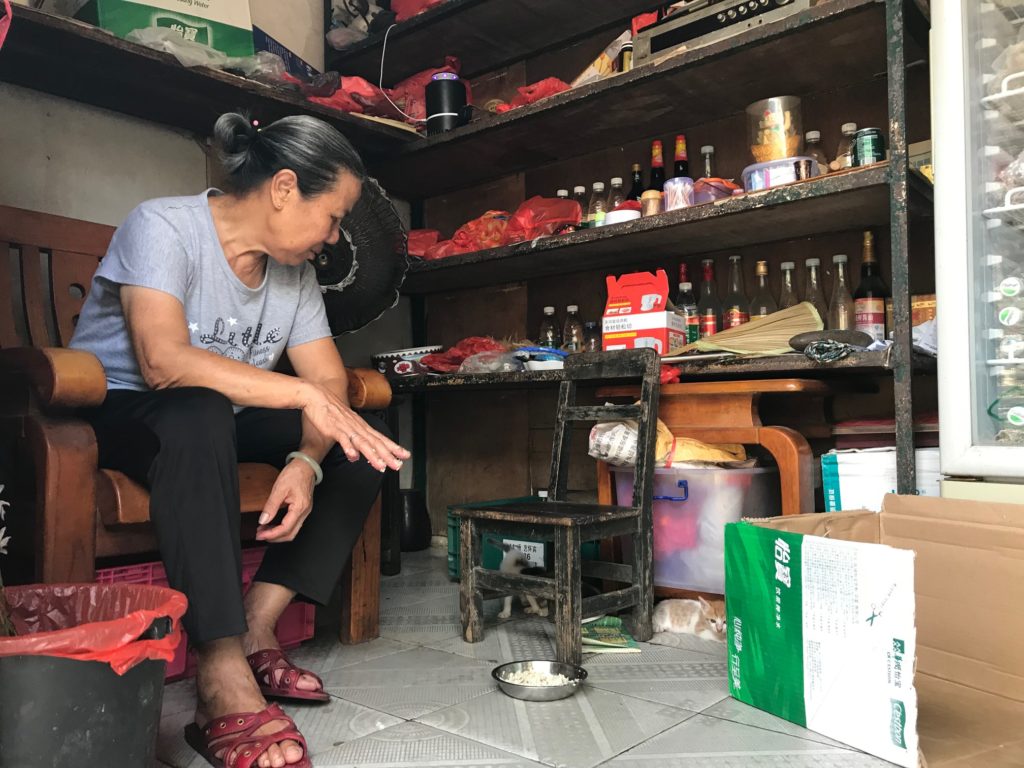 On another field trip to the Ancient Village of Shawan, some kittens in this small village shop caught my attention. 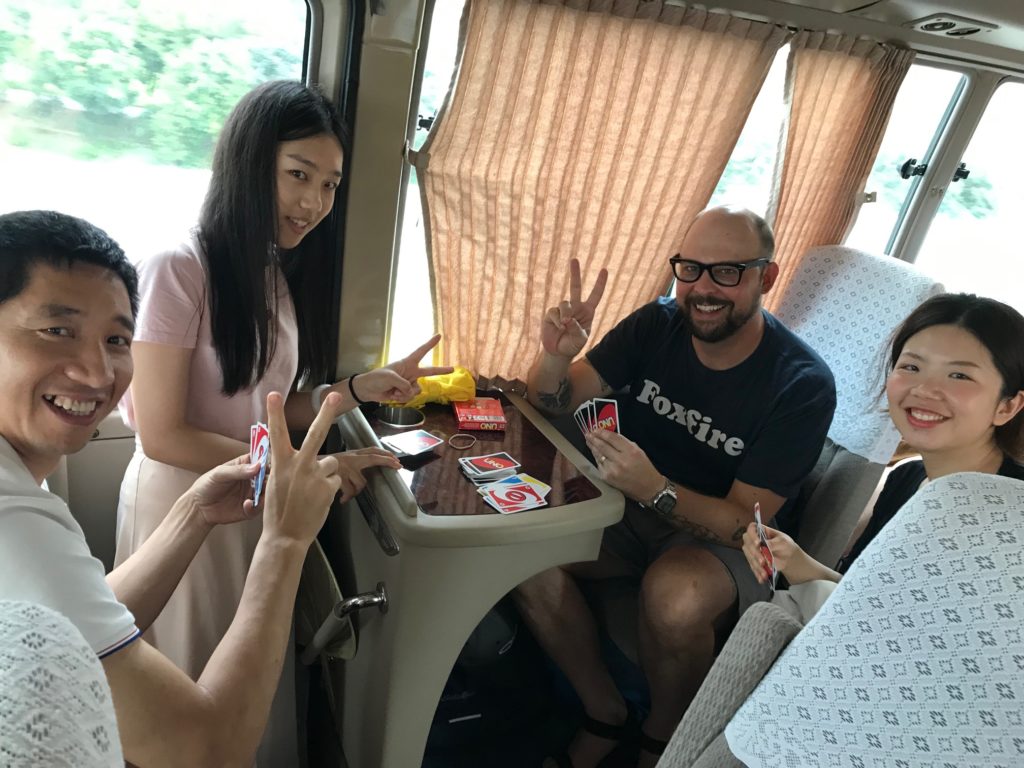 We called this “UNO Diplomacy” – a big part of the institute is encouraging the students to participate in some larger, deeper discussions on folklore and its preservation. Sometimes, it takes an icebreaker to create the trust needed for those discussions. As it turns out, card games are a great way to do that. This is me introducing UNO to three of the students, Hu Xiaoyu, aka “Max”, from Sun Yet-sen (who was a great help to me throughout the week), next to him, Liu Yanchao, a new Ph.D. student at the Chinese Academy of Social Sciences in Beijing, and, sitting next to me, Yao Cheng, a Ph.D. student also at the Chinese Academy of Social Sciences. 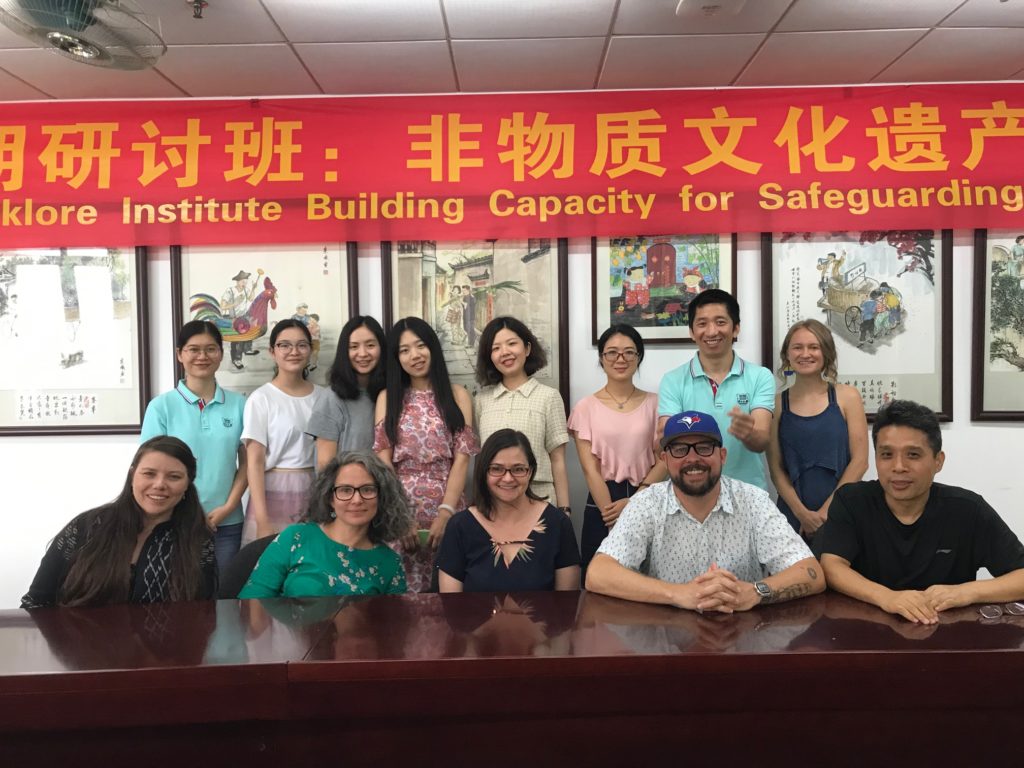 Overall, the experience was incredibly rewarding and had such an amazing time getting to know these wonderful people. These folks are family now, as they let me know at our final banquet the night before I left to return home.

In preparation for the podcast, TJ interviewed American Folklore Society executive director Dr. Jessica Turner over breakfast at the University Hotel at Sun Yet-sen. Please pardon all the background noise, as they were in a very busy hotel cafe.