“This Place Used to be Tough Country”: Harley Penland

Our second featured interview is with Harley Penland, who was interviewed in 1976. Harley was born and raised in Rabun Gap, Georgia to former slaves who remained in the county after emancipation. Interviewed nearly 40 years before Lena Dorsey, Harley presents a much different picture of race relationships in the mountains. His honesty enables us to see the history of the region through a different lens, and build a more complete narrative for the area.

Foxfire student Lynn Butler on her interview with Harley:

Harley Penland is a soft-spoken black man who is now 83 years old. Except that he moves around slowly and cannot see very well anymore, I would have thought him many years younger.

His family used to live on Black Branch in the Rabun Gap community. At one time, many black families lived there, but they have moved out for various reasons.

Mr. Penland owned quite a bit of land at one time and farmed some of it and kept horses and other livestock. As his health failed, he sold off some of it and only has a small garden now.

It was during the cold winter of early 1977 that I visited Mr. Penland to learn about his background and how his family came to live there in the mountains. We would sit talking in his snug living room, the doors to the rest of the house closed off to save heat, his pretty little five-year-old granddaughter playing quietly in a big chair. Time would fly by as I listened to his stories of early times in Rabun County, his various jobs as a laborer, soldier in World War I, and finally as a trucker driving over much of the Southeast. He has had some bad experiences just being a black person living in the mountains. Because of the prejudice against anyone not white that used to exist, not many black people stayed, although for many this is the only home they’ve ever known; their families were brought in more than 150 years ago. 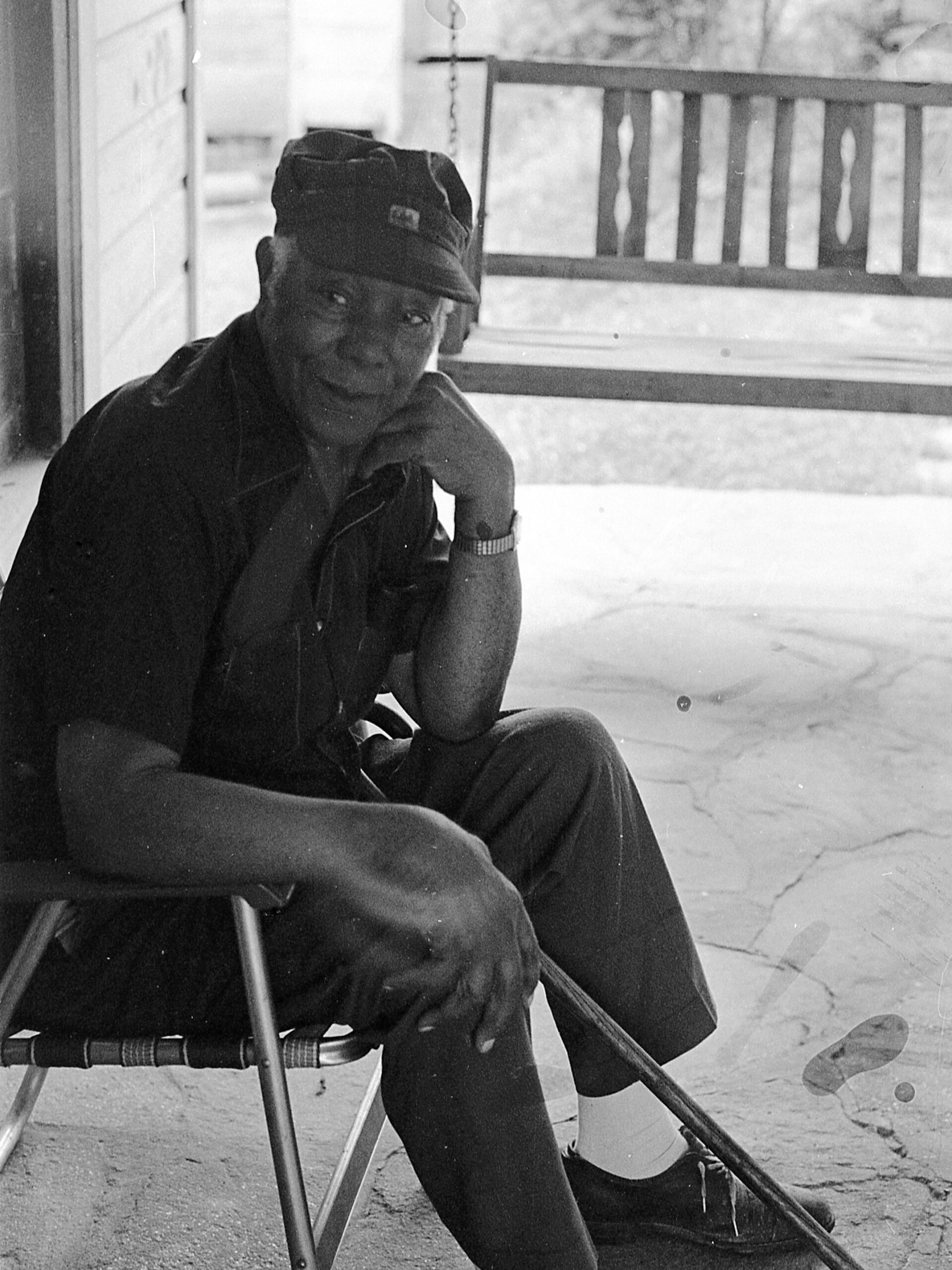 Harley Penland during his interview, 1976.

Harley starts his story with his family origins:

My father and his mother came from Danielsville, Georgia. The Penlands [in Franklin, North Carolina] bought them when my daddy was young. His father was a slave and my daddy was [born into slavery and] freed a little while after he was born.

My mother’s name was Georgia Scruggs. She was from here. The Scruggses had bought my grandma [and so my mama carried their name].

We moved from out on Black Branch near Rabun Gap to Clayton (a little further out this road) into a little two-room log house. We built a kitchen down the side. We had a stove in there and a long table we all ate on. There was a long bench against the side of the wall and we pulled it up when we’d all get to the table. That house has been tore down. It was wore out. My daddy built two houses after that out there. Those little wood houses didn’t last much over fifty years back then. They can now ‘cause they put a bottom under them before they build them. Then they just had rocks on each end and a chimney in front and a door on each side.

We had school only about three months in a year. that’s all they gave the colored folks. I think the white folks had six and up to nine months later on. Our school would get up to fifth grade, or maybe eighth—I don’t remember. My daddy made me work all the time. Some people got up to the eighth grade but I never could.

Then there’s some that’s smarter than others. I was one of the sluggish ones, I think. Or at least my daddy wouldn’t let me go to school. He’d make us pile rocks here and around there. He was one of the old heads—didn’t believe in colored folks havin’ no education. My mother wasn’t that way but my daddy was. He thought when you got where you could write your name, that was education enough. Lots of old folks had that in their head—from slavery, you know.

There was eight of us children altogether. More [colored] people lived back up there on Black Branch [when I was young] than there are [in all Rabun County] now. Back then, people farmed all those bottoms. Most of the farmers would have four to six head of mules. They’d hire a bunch of coloreds to come and work one day or two or three days at a time and that’s the way [the colored folks] got along. All of them raised a garden for something to eat. Everybody had a cow for milk and butter. It was big families then—eight and nine to a family.

Then [the colored] folks started moving [from Black Branch.] First one family and then another. There used to be plenty of [colored] families out there. It’s hard to find any of them now.

After I moved to Clayton, I had a job at a lumberyard in Mountain City. I had to walk all the way there and back besides working at home. There was some white families that lived out here below Mountain City and they’d stand out on the road threatening-like. They just wanted to see you run. I never was really bothered by none of them, but I have a brother older than I am and they got after him once and broke out his windshield. The law wouldn’t do nothin’ about it. That’s the way the biggest of it was done. Didn’t have no protection and just at the last they got to killin’. Two or three people was killed before it was all over with.

I think they tried to take some land from some [colored] people up here but they missed it on Elam Gibson. One of the lawyers in Clayton got up and rared around and said this was a white man’s country and always would be.

It got so we couldn’t get jobs at all and then some scattered to Atlanta and up to New York, around to different places. They could get work then by going north.

We went across the water in 1914 to fight in World War I. I heard that they treated all the men the same. I just didn’t believe it, see. I was raised here. I was drafter. I never volunteered to go—no siree! We were in British France. That was close to the foreign line, and boy, they had the soldiers there! They’d load ‘em up and carry the train up to the front and that was the last we’d see of them.

When I first got back, I used to haul tanbark to Sylva, North Carolina. And I’d take truckloads of apples and cabbages to Hartwell and Elberton and all through the country. I could sell more stuff out in the country than I could in town.

I think maybe the living is better for the colored people now, if they do right—don’t bother nobody else’s business and just do right.

Read the rest of Harley’s story in Foxfire 8