We are just about a week away from our Foxfire Heritage Day event and are busily running all over this mountain getting everything ready. Barry and Dave (aka Dexter, Handyman Extraordinaire) have been tidying up the museum inside out, mowing, weed eating, planting, and preparing for the day. In the Museum Store, Jessica and her right hand, Bridgett, have been getting our books and merchandise stocked and ready to go out the door. Meanwhile, Jan has been tracking ticket sales and making sure the bills get paid. It’s been an incredible team effort and we can’t wait to host all of our Foxfire family for, what we hope to be, a grand day on The Land.

As a little preview, we thought we should highlight some of the long-time demonstrators and contacts who will be with us next Saturday (May 13, 2017). This is by no means a complete list, but just a sampling of what to expect. So, take a moment to virtually meet these wonderful artisans and plan on coming up the mountain next week to see them in person. 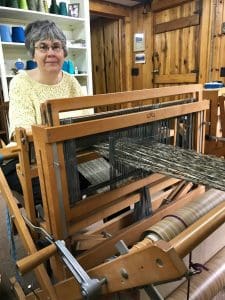 SHARON GRIST: Many visitors to the Foxfire Center are having a much richer experience in connecting to their own heritage thanks to Sharon Grist, The Village Weaver, Foxfire’s first artist-in-residence. The addition of a fiber arts component to the Center’s display allows people to see both the process and the equipment used before the industrial revolution. Sharon’s work as a professional hand-weaver has spanned more than twenty years. Some highlights of her career include the commissioned design of two distinct tartans that are now registered with the Scottish Tartans Society, and having been named “one of the country’s finest craftsmen” by Early American Homes, a magazine devoted to traditions, period style architecture, antiques, and history. We consider ourselves fortunate to have someone of Sharon’s stature and expertise at the Foxfire Center.

JOHN HURON: John Huron is a craftsman who came to his chosen profession later in life. What started out as an attempt to be an authentic Civil War re-enactor turned into a career change for him, and along the way, he met and was tutored by some of the best instrument makers around—Robert Mize and Ellis Wolfe. John told us, “I feel I’ve been given a level of mountain instrument-building knowledge equivalent to a Yale Law degree.”  When John discusses his instrument making, his eyes light up, his voice becomes animated, and his love for his craft becomes immediately obvious.  John builds banjos, dulcimers, mouth-bows, and other traditional mountain instruments.  His love for his craft and his skilled artisanship has placed him at the forefront of modern-day instrument makers. 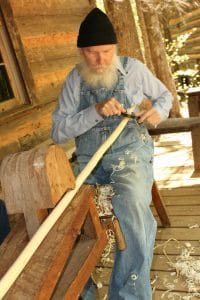 JERRY KING: In the tradition of Appalachian individualism and self-reliance, Jerry King wanted to be in control of his own life. As Jerry said when we interviewed him, “I was kinda on the tail end of a different way of life.” So, after he was grown, he decided to simplify his life and recapture or learn for himself the ways of earlier times. Two of the resources he used were The Foxfire Book and Foxfire 3! Jerry is, foremost, a wood-worker. He carves walking canes and talking sticks, builds fretless banjos, and makes chairs, as well as carves animal figures. He uses the same techniques and has the same skills as many of the Appalachian old-timers. Jerry is also an accomplished artist, doing an amazing line of American Indian paintings, as well as others. His wife, Isabel, and son, Reese, are also great woodworkers, joining Jerry at many area festivals to demonstrate their art. They live a self-sufficient life, even growing their own food and cooking it on a woodstove, while making most of what they need.

JENNY STEVENS: When Jenny Stevens ships a bar of her special handmade soap, she sends a personal message that reads more like one sent from friend to friend than company to customer. As with the artists who are reclaiming vanishing arts, the artisans who make what they need by hand are rescuing arts that make and strengthen real connections to the resources and people around them. Jenny takes craft paper and some twine and creates a little package so that, for everyone getting soap, it looks like a gift. She always writes a handwritten note with every order that says, for example, “Dear Shannon, Thank you so much for your order. Enjoy and God bless. Miss Jenny.” Jenny is a special lady who has also raised four talented boys!

T.J. STEVENS: As well as making homemade soap with his wife, Jenny Stevens, and four sons, T. J. is also an amazing and creative potter, making unique pieces from face jugs to mugs to egg separators to bowls.  T. J. has also passed down his art to his youngest son, Moses, age 6, who makes soap dishes for Miss Jenny’s homemade soap.  He so graciously shares his art with others, demonstrating pottery making and exhibiting his wares for Foxfire at our events, as well as at other Festivals as far away as Florida.  T. J. also teaches homesteading skills for local Boy Scouts at Camp Rainey Mountain.  What a talented family!

JOE WILLIAMS: Joe made his first bark berry bucket with his grandfather when he was ten years old, and he has now been making them for over forty years. What is now a beautiful creation that is a decorative piece for the home was a utilitarian piece for our ancestors to collect fruit for feeding their family or to carry water from the creek for the family’s use. Joe often demonstrates the art of making a bucket from the bark of native trees at Foxfire events and has taught a new generation how to make the buckets. He uses every part of the tree—not just to make the bucket, but also to make carvings and for firewood, and he always plants new trees to replace those that he harvests. Joe is also an excellent blacksmith and jack-of-all-trades! 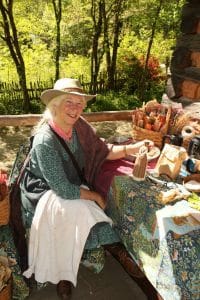 BETH KELLEY ZORBANOS: Inspired by Foxfire contact Daisy Justice and by her grandmother Mama Lottie, Beth Kelley Zorbanos practices the art of making cornshuck dolls almost entirely from materials many people might overlook or even discard. Each cornshuck doll is handmade with attention to the details of traditional life. Ms. Zorbanos has personalized the “purer version” with different tying methods and dyes, but the art lives on through the artist’s passion for her work and her desire to share that art at various local festivals, including Foxfire’s Folklife Celebration and The Foxfire Mountaineer Festival.