New year, new you! We’ve pulled an article from our archives to encourage you to meet your resolutions, and remind you that it’s never too late to start something new. This story, originally printed in 1975, features an interview with folk artist C.P. Ligon. C.P. worked as a roofer for most of his life, and it wasn’t until after retirement that he found a love for wood sculptures. He was dedicated to sharing his work with others and inspiring them to develop their own creativity—especially students. Several of C.P.’s pieces can be viewed at the Foxfire Museum. The following article has been adapted from Foxfire Summer/Fall 1975 and Foxfire 4. 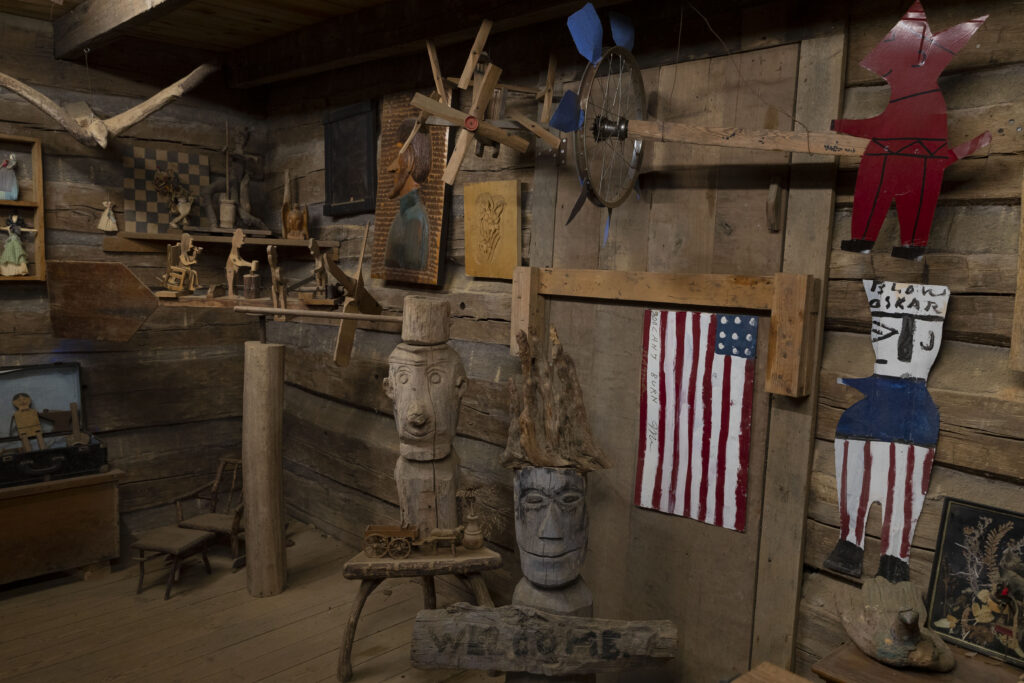 One day, out of the clear blue sky, Mr. C.P. Ligon of Toccoa brought some of his carvings to Foxfire for the students at our school to enjoy. This was the first time he had brought any of his figures up our way, as most of his work is on display closer to his home in Stephens County.

A couple of months later when it was time to return the carvings, several of us decided to go along and find out more about Mr. Ligon and his hobby. His garage and shop area were filled with logs, stumps, and sticks of all shapes and sizes.

When we began talking with him, we found out that he was 75, and started carving in 1967 after retiring from roofing. He had never done anything like this before in his life until then. It all began, he said, one rainy day when he went to town to get some enamel paint and began painting a picture. He had never painted before and said he did a lousy job, but he enjoyed the feeling and soon had picked up a hatchet, a handsaw, and some chisels. Before long a rough figure emerged and he was hooked. 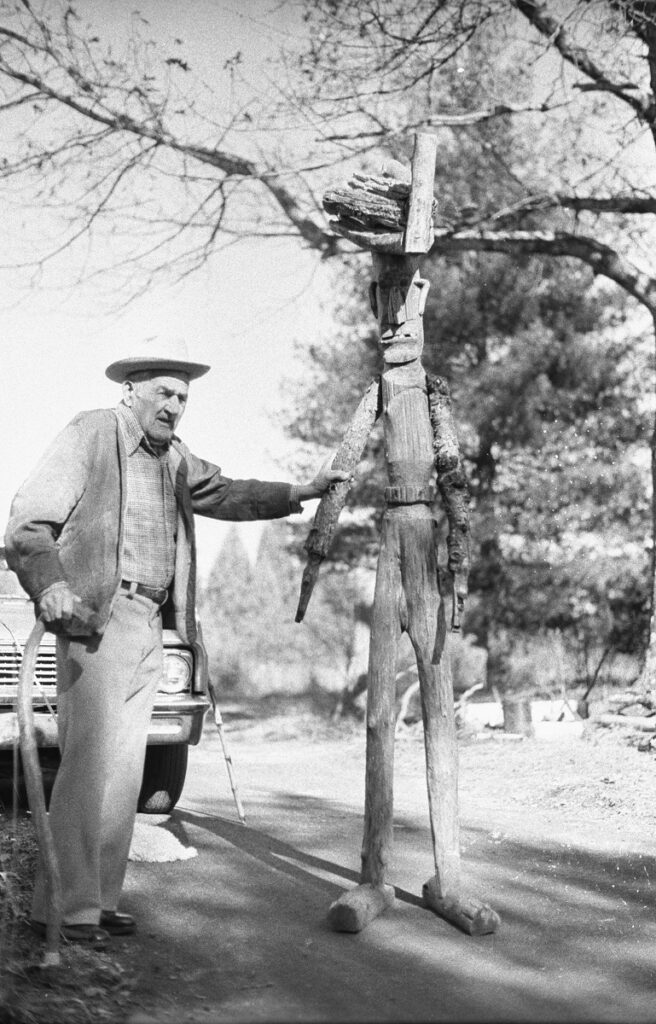 C.P. with his “Ichabod” statue.

He describes the things he carves as “junk for the school children.” He thinks they enjoy his rough work more than things that are finished and can’t “be touched and played with.” He refuses to ever sell a piece of his work. It is made exclusively for local groups that work with young people. Collectors are sent away empty-handed. He likes what he’s doing and he loves kids—money can’t buy those things.

“It just come natural. Do you know what’s the matter with people today? They don’t use the talents they’ve got. And lots of them don’t have the time to. Just like I was. I wanted to educate my children. I never took a vacation until it was almost time that I quit work. I quit work at sixty-seven.

Children didn’t used to have anything to make anything with. No tools. The kids always made their own things. We’d make wheels out of most anything. We really didn’t have toys. The first thing I bought for myself was a little knife for a dime when I was a boy. I would have liked to carve, but that knife wouldn’t even cut. I just had it just to have a knife. 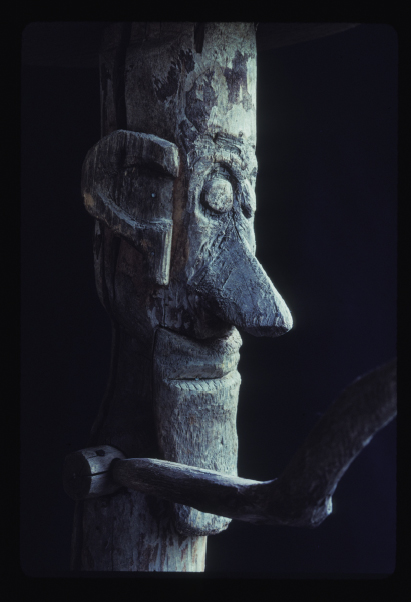 But now that I’m retired, I do all this stuff for the school children, and try to get them interested in things like this. If I can get one of them to try something, they’ll understand and maybe enjoy it. I don’t try to make nothing fancy like it was out of a store—finished. I make it rough. And they can understand that. If they go to the store and get something, it’s all dolled up. But this is an incentive for them to do something. They’ll try to do something like this.

I’ve worked with schools in Stephens County, and two in Habersham County. I come driving up and say, “This is what I’ve got.” [The other day,] I went up to a little school up there in Habersham County. They never had anything much. I drove up there and I asked for the principal. I told him what I had. He said, “Are you going to charge me anything for them?” I said, “No, they don’t have to pay me nothing to see the stuff. I’m making it for the good of them. Not to make money.”

My mother died when I was ten years old, and I loved her greatly. And my father got hurt about three or four years later at the cotton gin. After that, I stayed with my father. I didn’t get to go to school, but I learned a whole lot of what I needed to know. I didn’t really have a childhood like some children do, but I can’t complain. My father took up a lot of my time, and I never regretted a day of it. That’s one reason today I have a whole lot of respect for old people and kids, too. I enjoy the kids and I enjoy the old people.”